The Collection By Elegance

The Collection By Elegance A hard-working couple with an abundance of motivation.

When you think of an established young couple in the medical field, you wouldn’t expect them to have the spare time to build a house. But Pat and Arri were determined to create their dream home, while balancing their demanding work and study commitments. We met the duo a few months after they moved into their stunning Hamptons home.

From the moment we pulled up to the kerb we noticed their home had tremendous street appeal and a real ‘wow’ factor. Landscaping had been recently completed and the pair had added a garden bed and a statement planter to elevate the look. Personal touches like the welcome mat at the front door let’s guests know you’re in the presence of proud homeowners.

Pat was quick to answer the door and show us through the home while we waited for Arri and their puppy Charlie to join us. An enthusiastic Golden Retriever came billowing out of the bedroom with excitement shortly after we were welcomed in, followed closely by a composed Arri.

The first home owners sat down around their dining table next to a set of magnificent double French doors that opened onto a sea of greenery. They explained that their view is a sporting field that is used only for practice and not games – so their well-appointed outlook will remain relatively uninterrupted. Building wasn’t always the plan Arri explained. “We tossed up for a long time between building, buying and renting. And we decided we didn’t want to rent because we were paying off someone else’s mortgage. We looked at buying, but we couldn’t find what we wanted. We would’ve had to have renovated and that whole process would’ve ended up being more expansive then buying land and building it from start to finish – so we went with the cheaper option but the much better option of building something that suited our lifestyle.” Arri said.

The couple explained the actual build was quite an easy process, but the planning and research took a lot of time and preparation. Juggling that with studies and big work commitments made it difficult at times, but noticeably worth it once you are in their spectacular home.

“For almost an entire year we were going through Display Homes before figuring out that we liked the Hamptons façade the best. Then we narrowed our search down to all the builders who did one and we found Coral Homes had a few of the façade styles we liked (Hamptons, East Hamptons, Coastal), and basically it all aligned from there.”

At the time Pat and Arri were looking, Coral Homes were offering a promotion that allowed them to upgrade their shower screens, their kitchen benchtop and gave them a tile and carpet allowance. The couples plan was to buy a standard home and add luxury inclusions, and this deal meant that they could comfortably achieve the overall interior design they envisioned. “I like light, bright and colourful. We tried to open the house up as much as we could with rearranging the floor plan and adding in extra windows, so it wasn’t dark.” Arri said. The couple are still finding their daily home habits, however explained when puppy Charlie is old enough, they expect to be taking him for a walk every day to the doggy park. For the time being Pat and Arri are still settling in and know their home life will continue to evolve.

“We built a four bedroom with the expectation that we will make a family here. But for now just having the space for us is nice and to be able to have a puppy. We will eventually get a second puppy in a few years.”

The couple’s advice for first homeowners is that “you may have an idea of the costs early on, but it always ends up being more with things like post contract variations and additional upgrades. There are costs that will come up after the mortgage has settled, so you’ll be paying that out of pocket. You’ve just got to plan and know exactly what you want. Right down to the skirting boards and the grout between the tiles.” Pat said.

Arri agreed, “it takes lots of research, preparation and looking – we spent months putting ideas together from other houses. There were a few days that we went down to the Coral Homes MyChoice showroom and spent time walking around and talking before we had our appointment. Then when we did have our appointment, we had our questions that we didn’t know the answers to ready. It’s totally worth it! It’s hard work – but it’s totally worth it!” It’s Beach Meets Bush Don’t let the surrounding gum trees and bushland fool you. Coral Homes customers Carlie and Greg have created a Hamptons sanctuary with stunning coastal accents to bring the beach to the bush. “It’s a bit odd,” Carlie says with a smile of their Dayboro home. “Obviously, we live in the country, […]
END_OF_DOCUMENT_TOKEN_TO_BE_REPLACED

6 Steps to Building Your First Home

Building your first home is a dream for many young Australians – a place to call your own that has been designed to suit your family’s lifestyle and needs. But at the same time, it can seem like a daunting process with a lot of unknowns and things that need to be considered. To help […]
END_OF_DOCUMENT_TOKEN_TO_BE_REPLACED 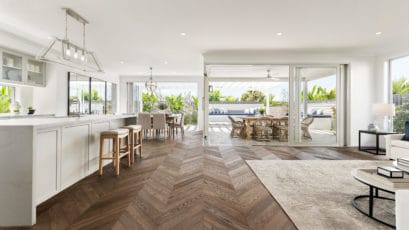 We love the Hamptons homes so much at Coral Homes; we have twelve beauties for you to explore within our vast display home network across NSW and QLD. Our Hamptons display homes feature Coastal, Montauk, East Hamptons and of course Hamptons façades. All are modernised, Australian versions of a traditional Hamptons home, with a variety […]
END_OF_DOCUMENT_TOKEN_TO_BE_REPLACED When it comes to selecting the tiles, electrical and colours to create your beautiful home, the choices are endless. Some customers can get so caught up on the colour scheme/interior design perspective, they can get lost in this world rather than stopping to think practically about what they need in their new home. A great […]
END_OF_DOCUMENT_TOKEN_TO_BE_REPLACED

Outdoor rooms are in huge demand

If you are looking to build a new home, an alfresco space is an absolute must! Top of mind, particularly during the Summer months, is having an alfresco entertaining space as part of your home. As Australian’s, a majority of us love the outdoors, so having great indoor-outdoor integration within our homes, plus an outdoor […]
END_OF_DOCUMENT_TOKEN_TO_BE_REPLACED 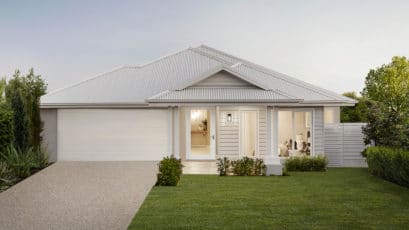 Weatherboard cladding is still the go to material for creating a typical Hamptons home. However, today’s materials are very different to what has been historically used… Weatherboard cladding is commonly used to cover the outside of a home so that it looks attractive and also protects the building. Weatherboards are traditionally made from timber or […]
END_OF_DOCUMENT_TOKEN_TO_BE_REPLACED

Everything you need to know about the new HomeBuilder grant

There’s never been a better time to build! A new stimulus packages has been released in the wake of the Coivd-19 crisis to boost the Australian economy. The $25,000 HomeBuilder grant was announced last week and will give Australian’s planning a home build a much needed helping hand. If you’re a first home buyer, you […]
END_OF_DOCUMENT_TOKEN_TO_BE_REPLACED Love our Milan 29 on display in the Hunter Region?

Get the look The Milan 29 home on display at Huntlee Estate, North Rothbury in the Hunter Region is the quintessential spacious single storey family home. This home design on display delivers 279.76m2 of living space across four bedrooms, two bathrooms, three living spaces (including a media room) and an extended outdoor area. Specifically designed to […]
END_OF_DOCUMENT_TOKEN_TO_BE_REPLACED The evolution of floor plans

At Coral Homes, we strive for innovation and maximum liveability in our home designs Back in the day, homes were designed so that each and every space was defined by walls and each of these rooms had a specific purpose. Today, families love large open spaces in the shared living areas and multiple break out […]
END_OF_DOCUMENT_TOKEN_TO_BE_REPLACED How to choose the right home design

How to Choose the Right Home Design The huge benefit with building over buying an established home, is that you can choose a home design to exactly suit you and your family’s lifestyle and needs. Plus, the benefit that everything is new of course! However, there are literally hundreds of floorplans to choose from when […]
END_OF_DOCUMENT_TOKEN_TO_BE_REPLACED There’s never been a better time to build Can you believe that 2020 is over and 2021 is here? We can’t! Coral Homes is now officially back from our close-down period, with our displays, head office and construction teams all officially open for business. During our break, we rested and contemplated our goals for the […]
END_OF_DOCUMENT_TOKEN_TO_BE_REPLACED Take a journey with us to discover all eleven display homes opened this year! 2020 was certainly an interesting year to say the least. Many things didn’t go as planned, but our display home program did! We opened eleven new and stunning display homes for you to visit in person or explore online with our virtual tours. As […]
END_OF_DOCUMENT_TOKEN_TO_BE_REPLACED